Medvedev Gets His Wish, Off To Winning Start In Madrid

Daniil Medvedev got his wish on Wednesday to win at least one match this week at the Mutua Madrid Open. The second-seeded Russian broke a six-match tour-level losing streak on clay with a hard-fought 4-6, 6-4, 6-2 victory over Alejandro Davidovich Fokina of Spain in two hours and 13 minutes.&ldquo;I am happy with the win,&rdquo; said Medvedev. &ldquo;The first set wasn&rsquo;t easy and I thought it was going to be where I had another 25 break points and I wouldn&rsquo;t win. I finally played quite well and did well in the third set. I think Madrid is a little faster than other clay tournaments, so better for my game.&rdquo;Medvedev, who was playing his first match since losing to Roberto Bautista Agut on 31 March at the Miami Open presented by Itau, improved to an 18-3 match record in 2021 and will next challenge Chilean No. 16 seed Cristian Garin, who was a 6-3, 6-4 winner over Dominik Koepfer of Germany.Following an exchange of breaks midway through the first set, Davidovich Fokina clinched the 53-minute opener when Medvedev struck a backhand long. Medvedev broke to lead 3-1 in the second set, before Davidovich Fokina worked his way back and led 3-3, 40/15. From there, it was all Medvedev, who reduced his error count. The 25-year-old finished their first ATP Head2Head meeting with an ace, his 19th winner, and is now 5-0 in deciding set match this season.[WATCH LIVE 1]Medvedev finished runner-up to Novak Djokovic in the Australian Open final and went on to capture his 10th ATP Tour title at the Open 13 in Marseille (d. Herbert) in March. He has a chance to rise to No. 1 in the FedEx ATP Rankings if he captures the Madrid title, reaches at least the Internazionali BNL d'Italia semi-finals and other results go his way.

Medvedev's Chase For World No. 1

Daniil Medvedev is making his clay-court season debut at the Mutua Madrid Open. And over the next two weeks, the Russian star will be battling for more than just titles in Madrid and Rome.With strong efforts at the Caja Magica and the Foro Italico, Medvedev will turn up the heat on Novak Djokovic in the battle for World No. 1 in the FedEx ATP Rankings.Medvedev has a chance to ascend to No. 1 by the end of the Internazionali BNL d'Italia. If the Russian wins his first clay-court ATP Masters 1000 title in Madrid or Rome and advances to at least the semi-finals at the other tournament, and Djokovic does not make the Rome final, Medvedev will become the first player outside the Big Four to hold World No. 1 since Andy Roddick was there the week of 26 January 2004.This will be a tough task for Medvedev, who has never won a match in Madrid, Rome or at Roland Garros. But nevertheless it is a big opportunity."As soon as you reach No. 2, of course you want to stay [there] as much time as possible. But at the same time the next goal, if you want to improve, is to get to No. 1," Medvedev said. "It&rsquo;s not like you need to just go to your house and for one month run around your flat 10 times every day and you&rsquo;re going to become No. 1. It&rsquo;s all about playing good, winning big titles, so It&rsquo;s not a goal that you can achieve logically. You just need to play very good and win huge titles and that&rsquo;s what I will be trying to do." Medvedev currently sits at World No. 3, having been passed by Rafael Nadal for No. 2 following the Spaniard&rsquo;s Barcelona Open Banc Sabadell victory. The Russian is 2,263 points behind Djokovic. But that gap is not as wide as it appears. Points Dropping In Madrid, Rome &amp; Paris Player Madrid Rome RG Total Current Points Points After Drops Djokovic 500 500 600 1,600 11,963 10,363 Nadal 180 910 1,000 2,090 9,810 7,720 Medvedev 5 5 5 15 9,700 9,685 Medvedev has relatively few points to defend in the coming weeks. The Russian will drop a combined 15 points in Madrid, Rome and Roland Garros compared to 1,600 for Djokovic and 2,090 for Nadal.Djokovic is not in action this week in Madrid, but he will keep 500 points (50% of the points from his 2019 title) due to the current "best of" FedEx ATP Ranking formula, which has been recalibrated due to the COVID-19 pandemic. The Serbian is guaranteed to keep at least 500 points in Rome, where he won the title last year. He is still plenty motivated to keep his top spot, which he has held for a record 319 weeks. &ldquo;In order to stay at the top ranking spot, you have to keep playing and not just keep playing, but keep making successful runs at most of your events in order to have a chance,&rdquo; Djokovic said. &ldquo;Being at No. 1 is also a huge responsibility, but you feel that rear window pressure from Daniil at this point or Rafa or whoever it is. There&rsquo;s always somebody. The challengers want to get there. They want to challenge you, they want to push you. "I think the more they push me, the more I have motivation to work even harder to stay there.&rdquo;Nadal at a minimum will hold onto 180 points in Madrid (50% of the points from his 2019 semi-final) and 90 points in Rome (50% of his 2020 quarter-final). Since Medvedev has not won a match at those events, he will only drop five points from each (50% from opening-match exits).Medvedev has not played since Miami because of a positive COVID-19 test ahead of Monte-Carlo. But the Russian has enjoyed success on clay before. In 2019, Medvedev made the Monte-Carlo semi-finals and the Barcelona final. The Russian admits it would feel "amazing" if he's able to battle his way to World No. 1."It&rsquo;s one of the goals of the career. When you go from the juniors to professionals, you want to get in the Top 1,000, then you want to get in the Top 500 and [those are] small goals. Now I&rsquo;ve reached almost every place except the No. 1 [spot], so it&rsquo;s going to definitely mean a lot [if I get there]," Medvedev said. "But I&rsquo;m sure especially if you ask people [who have been there] that as soon as you reach, it you&rsquo;re going to start thinking, 'Okay, how do I stay here? How do I win more titles?'"

Rafael Nadal: 'Novak Djokovic and I played an exciting match in Madrid 2009'

Tennis - In Madrid 2009, the Spaniard prevailed 3-6, 7-6, 7-6 in four hours and three minutes after fending off three match points

Russians went 0-4 on Thursday in

The Day Nadal HIT Djokovic and Then Defeated Him!!

Novak Djokovic Being a Volley Master for 10 Minutes 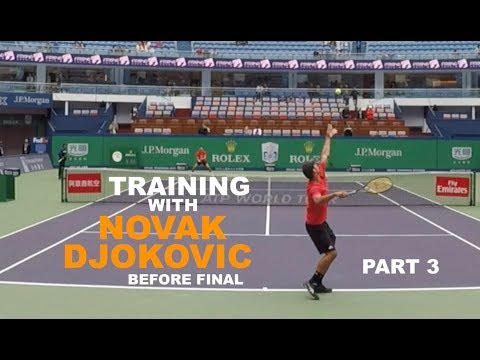